Institutions are Growing Increasingly Bullish on Bitcoin Following Drop to $10,000


Bitcoin and the entire cryptocurrency market are heading into the weekend trading session without seeing any immense volatility.

While BTC remains stable above $10,300, some smaller altcoins have seen some overtly positive price action.

This seems to indicate that speculative investors aren’t growing too fearful about the cryptocurrency’s current technical position.

That being said, the latest Commitment of Trader’s (CoT) report from the CME shows that while retail investors are increasing their short exposure to the benchmark crypto, institutions are flipping long for the first time in a long time.

At the time of writing, Bitcoin is trading sideways at its current price of $10,350. This is around the price at which it has been trading throughout the past few days, with bulls and bears largely reaching an impasse.

This marks a notable decline from the cryptocurrency’s recent highs of $12,400 that were set earlier this month.

It appears that this weakness has struck a blow to investor sentiment, as the Fear and Greed Index reveals that investors are now more fearful than they have been since before BTC pumped towards $12,000.

One analyst spoke about this trend in a recent tweet, saying:

“Fear is at the exact same level as just before the pump to 12k.”

While speaking about the latest Commitment of Traders (CoT) report, data aggregator Unfolded noted that while open interest is diving, it seems as though institutions are now moving to increase their long exposure to Bitcoin. 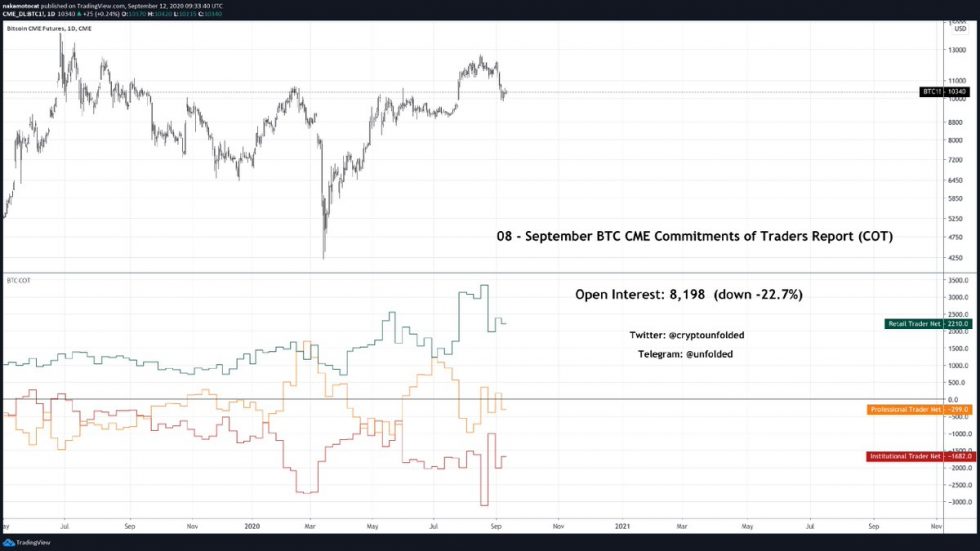 As seen in the above chart, retail investors also seem to be rapidly decreasing their BTC long exposure.

This trend reveals that while retail investors are growing fearful and flipping short, so-called “smart money” is going long.

Bitcoin Price: Has BTC Reached The Final Stages Of The Bear Market?

Bitcoin stable as Credit Suisse, Deutsche Bank rumored to be on verge of collapse

Bitcoin Price: Has BTC Reached The Final Stages Of The Bear Market?

Currently, Bitcoin is going through one of the harshest bear markets ever. As this is being written, Bitcoin prices have...

Bitcoin stable as Credit Suisse, Deutsche Bank rumored to be on verge of collapse

Bitcoin has defied the downward trend of major currencies such as the British pound (GBP) and Chinese yuan by increasing 6.5%...

How inflation and debased fiat currencies are pushing investors to Bitcoin

Bitcoin’s reputation as a safe haven asset has long been disputed by the world of traditional finance. Its lack...

Bitcoin, in October last year, registered an average closing price of $58,051. It enters the first day of the...

A16z, FTX and Sequoia Lead $135M Round for LayerZero at $1B Valuation